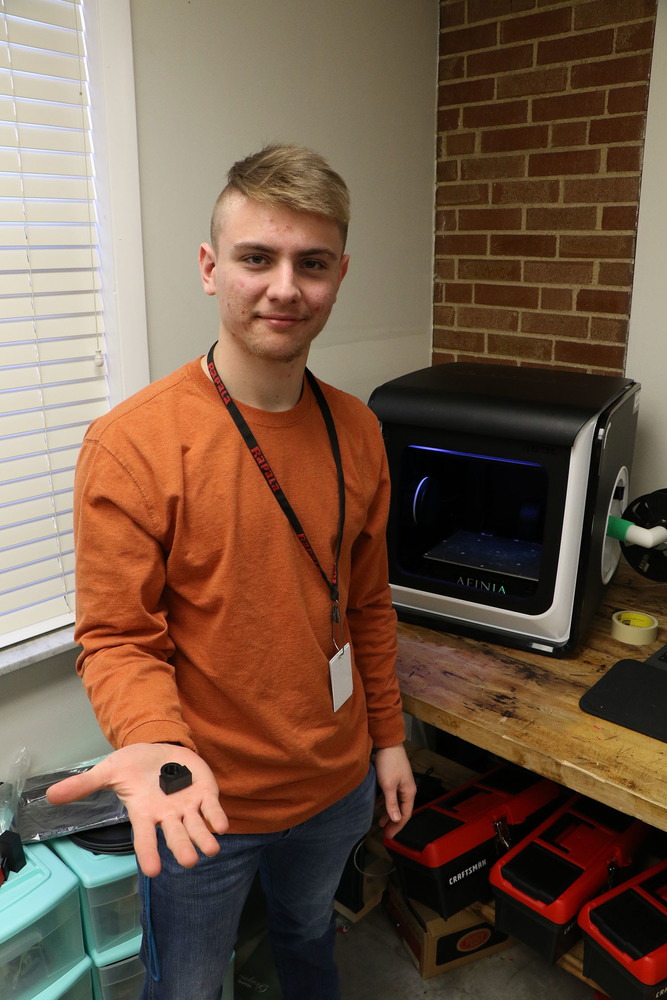 When an integral piece on a Ste. Genevieve R-II School District 3D printer broke, one student decided to take it upon himself to create a replacement part. He succeeded.

Senior Gauge Wiegand pointed out to Library Media Coordinator Carrie Staffen that a small piece that holds the base of a 3D printer level had broken, and he asked if she could order a replacement. She reached out to the company to price the part and service. She received a recommendation to ship the printer in for repair, because although the piece was relatively inexpensive, replacement could be tricky. At a minimum, the estimate for repair was around $300, plus shipping and handling.

Upon hearing this, Gauge decided he wanted to give his 3D printing skills a try. This is Gauge’s second year working with 3D printers; throughout SGHS technology and engineering teacher Kenny Rapp’s classes, Gauge had built a dependable foundation of experience. Mr. Rapp and Mrs. Staffen decided to see what he could do. Gauge designed four portions that interlocked together to create the part, which he then had to install until he could get the base to level perfectly.

Gauge said he made a few versions of the part and figured out through trial and error what worked and what didn’t—the dimensions had to be exact for each of the four portions he created.

“Gauge has the printer running just as good as before, maybe even better!” Mrs. Staffen said. “This is a real-world application, and we could not be more proud of him for taking on this task and working through the problem-solving process to reach his goal.”