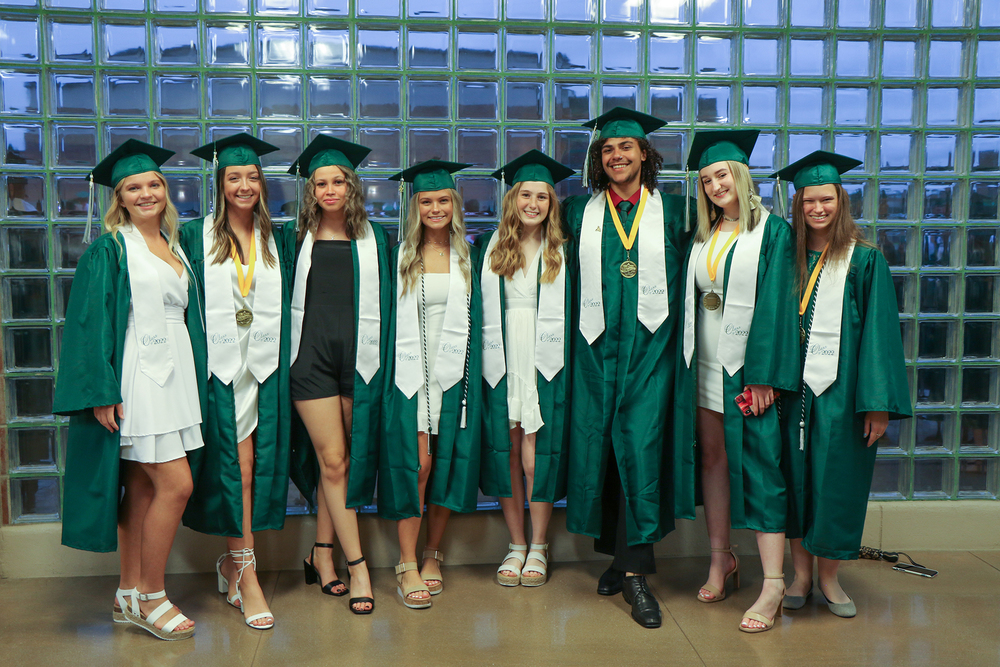 Congratulations to the Class of 2022 on their graduation from Ste. Genevieve County R-II School District! We are beyond proud of you, and wish you the best as you move forward. See specific recognitions and awards from the ceremony below! The full video can be seen here.

Four special awards are presented at graduation to two girls and two boys in the senior class. These students are voted on by the entire high school teaching staff and they represent outstanding characteristics such as: Character, leadership, citizenship, and scholarship. The recipients of the 2022 Danforth “I Dare You” awards are:

The two recipients of the 2022 Outstanding Senior Girl & Senior Boy awards are:

The three recipients of the Instrumental and Vocal Music Awards are:

The two recipients of the 2022 Athletic Awards are:

The Dragon chapter of the National Honor Society is the most prestigious of the co-curricular groups at the high school level. Members are selected by a faculty committee and are students who reflect outstanding accomplishments in the areas of scholarship, character, leadership and service. All four areas are equally considered, and students selected for membership must continually strive to use their talents and skills for the improvement of society. Members include:

Members of the National Art Honor Society are selected by demonstrating outstanding abilities in the visual arts including participation in art shows and sales, and museum and gallery exhibitions. Students must also receive letters of recommendation from teachers in the areas of creativity, dedication, service and character and must have achieved an “A” average in Fundamentals of Art and maintained that average in every art course thereafter. Members include:

This is the 21st graduating class from Ste. Genevieve High School as A+ seniors. To meet the requirements of the A+ Schools Program, students must earn a 2.5 non-weighted cumulative grade point average, a 95% cumulative attendance average, a record of good citizenship, a score of Proficient or Advanced on the Algebra I End-Of-Course Exam or alternate qualifier and must have completed at least 50 hours of unpaid tutoring or mentoring. As certified A+ students, they are eligible for tuition assistance to attend any Missouri community college or vocational/technical school. These students include:

The FFA State Degree is the highest degree a student may earn in FFA. This degree demonstrates the student has devoted an exceptional amount of time into their SAE and local chapter. It is awarded after receiving the aforementioned degrees. The FFA State Degree recipients for the Class of 2022 are:

Students Enlisting in the Military:

The students below have enlisted to serve our country and have received their detachment dates:

The George Washington Carver Award is an academic award that was established in 1986 by former Governor John Ashcroft. Governor Michael L. Parson and Dr. Margie Vandeven, Commissioner of Education, are pleased to continue this award that honors the outstanding achievement of seniors in Missouri’s high schools. The George Washington Carver Award is named for an outstanding Missourian and scientist.

In making the announcement to establish the award, former Governor Ashcroft said, “George Washington Carver is the kind of role model I believe Missourians need to hold up to their children.  There is no better way to honor both Mr. Carver and your top students than by giving our very best high school seniors the George Washington Carver Award.  I would like to recognize high academic achievement by making this award available to the top ten percent of each high school’s graduating class in the State of Missouri.”

George Washington Carver achieved his dream of finishing high school and later college; although, he was born a slave and denied the opportunity for much formal schooling in his early years. He first studied art, but later chose science and agriculture as his profession and became one of America’s great practicing natural scientists. Carver spent most of his adult years at the famed Tuskegee Institute in Alabama, devoting his life to the improvement of agriculture in the South. His scientific efforts made him well known throughout the United States, and commercial applications of his research have greatly improved the quality of life for all Americans.

The students who received the George Washington Carver Award for high achievement during their four years in high school are:

The following students have earned the President’s Award for Education Excellence:

In order to qualify as a recipient of the Ste. Genevieve County R-II College Preparatory Studies Seal on Diploma students must complete a rigorous high school program cooperatively planned by the school, the student and the student’s parents.

These students have completed a strong academic program, as specifically outlined, in the subject areas of English/Language Arts, Mathematics, Science, Social Studies and Specified Core Electives while maintaining a 95% or higher cumulative attendance rate.

The following students were recognized for receiving local scholarships. Ste. Genevieve High School sincerely appreciates the support of the community and businesses that fund these scholarships, and we are proud of the dedicated commitment to education that exists within our community. These scholarships are appreciated by the students and will help them to achieve their goals.

The following seniors from Ste. Genevieve High School have received scholarships from local businesses and organizations:

The selection committee would like to thank the following area businesses and organizations that contributed scholarships to the students of Ste. Genevieve High School: