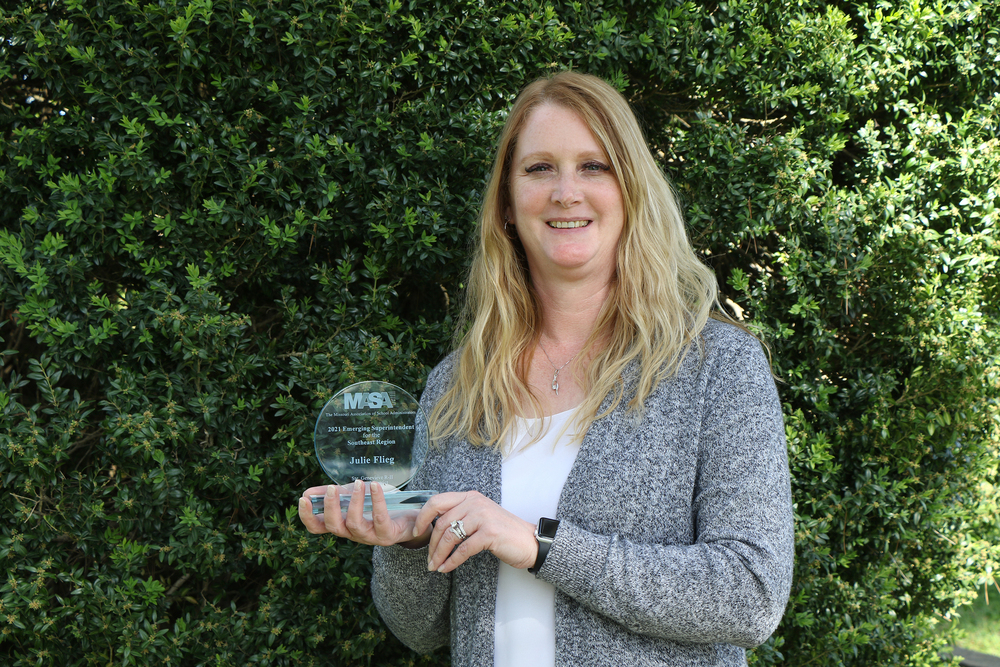 Dr. Flieg was nominated for the honor by her colleagues in the Southeast MASA District. She was honored during the awards banquet at the MASA Spring Conference on March 24.

This award is presented annually to superintendents who are in their second or third year of employment as superintendent and have made a measurable contribution to the school district which they serve.

“Over the past few years as a new superintendent, Dr. Flieg has proven to be a careful, thorough planner, a pragmatic problem-solver, a proponent of community partnerships, and an empathetic leader. These qualities have been invaluable to our District, but have been especially essential over this last year,” Board of Education President David Bova said. “She has guided us through the unexpected and jarring changes brought on by the COVID-19 pandemic, while helping to keep the students’ best interests at the forefront.  With her leadership as the foundation, our faculty and support staff, as well as our local community, worked together to determine the best direction for our District. And all the while, she remains steadfast and focused on our District's continuous improvement, including financial planning and a vision for future facilities and what is best for our students who are graduating both this year and twenty+ years from now. Dr. Flieg is more than deserving of this recognition, and the Board of Education is thrilled to offer her our congratulations.”

Dr. Julie Flieg is an alumna of the Ste. Genevieve R-II School District and has spent the entirety of her educational career as part of the SG R-II family. Dr. Flieg first took a position as a secretary and registrar at the high school in 1992, and then taught Adult Computer Education in 1994. In 1996, she took on a dual role: she was a Business teacher for the middle school and also held a teaching assistant position in the Special Education Classrooms. In 1997, she made the transition to the high school to teach Business, where she stayed for six years. In 2003, Dr. Flieg became the assistant principal of the middle school and the district’s athletic director. In 2009, she became principal of the middle school, where she stayed for five years. In 2014, Dr. Flieg became the assistant superintendent, and in 2018, she became the superintendent.