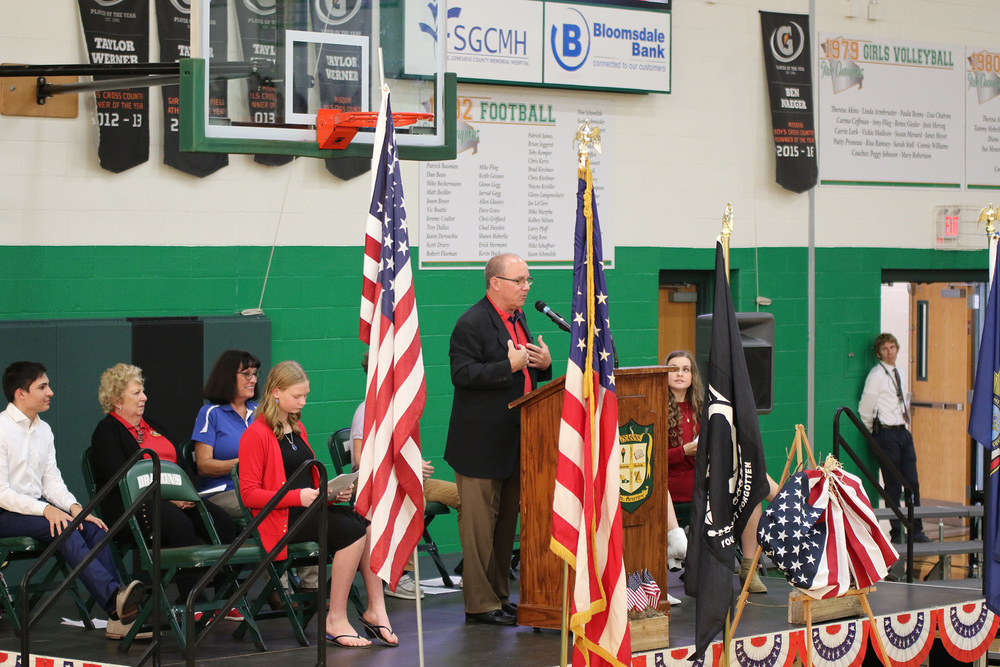 Ste. Genevieve Elementary held its program on Tuesday, Nov. 9, at the Performing Arts Center, and Bloomsdale Elementary held a virtual program with students on Wednesday, Nov. 10. The high school and middle school Veterans Day Tribute ceremony was held on Wednesday at the high school. All local veterans were welcome, and students personally invited veterans as their guests, as well.

At both elementary school events, students participated through speaking, presenting the White Table Ceremonies or performing. Veterans and active military members were recognized by having their name and the relationship to a student announced or shared. Throughout the week, students and staff alike sported red, white and blue clothing this week as students learned about what it means to be a United States veteran. Students shared their appreciation through videos of thank you clips and photos recognizing our service members.

Ste. Genevieve High School, Ste. Genevieve Middle School, and Valle Catholic hosted a luncheon for veterans prepared with contributions from local business sponsors mentioned below. Following the luncheon, the Veterans Day Parade began at the American Legion and wound through downtown past Valle, Ste. Genevieve Middle School, Ste. Genevieve Elementary and back behind Ste. Genevieve High School. Small American flags lined the parade route, where middle school students in the National Junior Honor Society had placed them earlier in the day, to honor members of the military, both current and retired, who protect our freedoms. Students and staff at the schools waved banners and flags during the parade to thank our veterans for their service.

For the first time since 2017, two WWII Veterans were in attendance at the Veterans Day Tribute.

“Here at Ste. Genevieve County R-II School District, along with Valle Catholic Schools, we remember and celebrate those men and women who were and are willing to pay the ultimate sacrifice for the greatest country on Earth and for each and every one of you,” Dr. Smith shared.

SGHS would like to thank the following: the Veterans of Foreign War Post 2210 Color Guard; Mrs. Betty Arnold from the VFW Post 2210 Auxiliary; all of our alumni who are serving active duty; our high school seniors who are enlisted or plan to enlist; all of the veterans and their spouses for taking time out of their busy schedules to attend the ceremony; the choirs and the bands for their contributions; the Student Veterans Committee (Arie Taylor, Kali Schweigert, Rudy Flieg, Wes Basler, Sam Brewer, Mackenzie Hogenmiller, and Averi Koch) for the planning of the day’s events; the students and staff for their attention and participation in the program; the Ste. Genevieve Rotary, the Zell Jaycees, Citizens Electric, Ste. Genevieve Elks, Veterans Home Care, Rozier’s Country Mart, Cafe Genevieve, Jodi Flieg, Oberle’s Meats, G&D Meats, and Save-A-Lot for their donations and financial contributions; the Dragon’s Lair Productions, the SGHS Broadcasting Team, Valle Catholic Schools, FFA, NJHS, FBLA, SGHS Girls Basketball Program, SGHS Football Program, SADD, and the Student Councils from both SG R-II and Valle for planning and executing the 2021 Veteran’s Day Tribute, the Parade of Veterans, and the Veteran Luncheon.