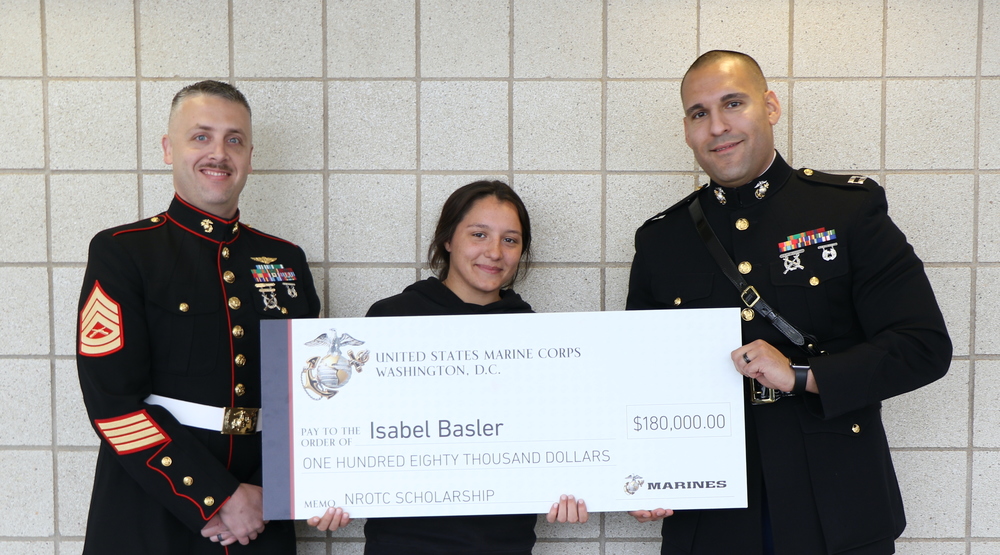 Ste. Genevieve High School is proud to announce that senior Isabel Basler has been bestowed with the Marines NROTC (Naval Reserve Officers Training Corps) $180,000 scholarship. Isabel was surprised with this recognition at a high school assembly, and was presented this scholarship by U.S. Marines Captain Jeff Torres, Gunnery Sergeant Benjamin Unterreiner, and Staff Sergeant Dylan Wheeler. Isabel is the daughter of Katy and Paul Basler.

Out of more than 1,200 national applications, only 200 applicants were chosen for this scholarship. Isabel plans to attend MIZZOU, earn a bachelor's degree in accounting and a CPA certificate. She will be commissioned as a second lieutenant in the U.S. Marine Corps upon graduation.

“This scholarship is going to help me start out on the right track to being successful, and I am grateful to have been chosen for it,” Isabel said. “I’m looking forward to the upcoming challenges and also the experiences that this opportunity will offer. For me, this feels like my hard work pays off, and I want to thank everyone for their support and encouragement.”

Isabel is a multisport athlete, and throughout her wrestling and softball careers, Isabel’s drive, focus, and determination have earned her numerous accomplishments.

In wrestling, she is a three-time varsity letterman, a three-time state qualifier, a 2021 sectional champion, a two-time SEMO Conference Champion, and a 2022 SEMO Conference Tournament Outstanding Wrestler. In 2021, she was a fourth-place state medalist and won 1st place in sectionals and 2nd place in districts. Isabel earned the Ste. Genevieve High School Girls Wrestling 2022 Most Valuable Wrestler Award with the most wins and most falls, and she was also recognized with the 2022 J-98 Winter Dream Team Award. She was recognized with the SGHS Girls Wrestling 2021 Hardest Worker and Most Pins and the 2020 Rookie of the Year.

“This is a great opportunity for Isabel to further her education and bring service to her country,” head wrestling coach Jared Bonnell said. “What separates Izzy is her desire to be challenged— she is uncommon amongst the uncommon. She is geared to push herself, and she strives to work toward that next level. We are honored to have had the opportunity to have been her coaches.”