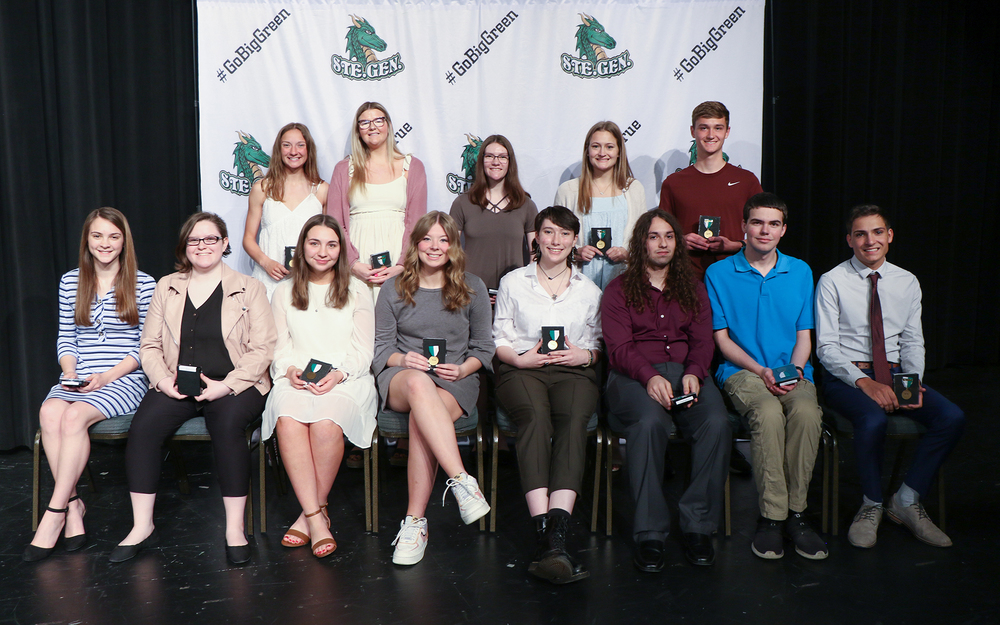 The guest speaker for the evening was introduced, Mrs. Emily Wilkerson (Huelskamp), a 2005 alumna of Ste. Genevieve High school, and a highly decorated rower. Emily graduated from Wheaton College in Illinois in 2009 with a Bachelor’s of Science Degree in Applied Health Science. She went on to attend Boston University, graduating in 2010 with an MEd. in Counseling with a concentration in Sport Psychology. Emily’s rowing career launched in college, where she made the decision that this sport was going to be her priority. Being able to devote her focus and attention to her team and to improving in her sport paid off. In 2013, Emily won a gold medal in the women’s four at the World Championships in South Korea. In 2015, she earned a gold medal in women’s pair at the Pan Am Games held in Toronto. In 2016, she was on a women’s eight team that won the Remenham Cup at Royal Henley Regatta. Also at the World Championships in 2016 in Rotterdam, Emily was on a women’s four team that won a silver medal. At the 2019 World Championships held in Austria, Emily’s women’s quad qualified their boat for the Olympic Games in Tokyo. Emily currently works as a Mental Performance Coach at Louisiana Tech University and is the owner of Second Round Bakery.

She spoke to students about finding their own priorities and balancing them with other aspects of their lives. She pointed out that once you decide your priority, life gets easy, because you can completely embrace your path. “Your priority has the potential to push you further than expected,” she said. “And don’t let anything, including who you are at the present, dictate what you will become.”

This was followed by a presentation by Mr. Tyson Schaffner, with the Patched Overalls Experience, a project that offers one student each year the opportunity to fulfill a dream experience between their junior and senior year. This year, Mr. Schaffner shared that a senior was also chosen for this opportunity, as the current seniors were unable to participate last year. He first introduced junior Lindsey Crump, who plans to visit Big Horn Basin in Montana and spend 10 days at an archaeological dig site searching for dinosaur bones. He then introduced senior Christian Kiefer, who shared that he wanted to participate in a hospital shadowing experience overseas. Christian planned a trip to Croatia, which fell through, and then planned a back-up trip to Tanzania, which also fell through. The organization that had offered these trips had gone bankrupt, and Christian was left with uncertainties and no clear way forward. He is still actively searching for a program or journey that will benefit him in ways that will positively impact who he is as a person. Christian shared that from this experience, he learned that things are not always in our control, and we have to move forward and adapt to new opportunities.

Each year at the banquet, the students in the top 10 percent of each class are recognized. Following the class honors, one student is awarded for his or her performance for each course offered at the high school. Congratulations to all of the students on their recognitions!

Each of the following students (listed alphabetically by surname) earned a medal for outstanding academic achievement in his or her individual class:

Dr. Boyd shared a special thank you to the following for their role in the event:

In closing, Dr. Boyd celebrated the amazing performance of the 2022 Scholar Bowl Team! The SG Varsity Scholar Bowl team clinched the MAAA Scholar Bowl Conference Championship, performed amazingly well at the district tournament and finished their amazing season as one of the top 8 teams in the state! Congratulations also to Kaylee Forhan for being named the #1 All-District Medalist!

The evening closed with a poem written by SGHS sophomore Penny Yang. Penny is a published author, and Dr. Boyd read one of her published poems, “Book of Life” from her book, “the teenage mind: Poetry Collection”. He talked about how the poem made him consider how the chapters in his personal book of life are dedicated to the students who have had a profound impact. He shared that he hoped that all in attendance would take some time in the coming days to think about our own books of life, and the chapters that would be included, and those who have had a profound impact on each of us.