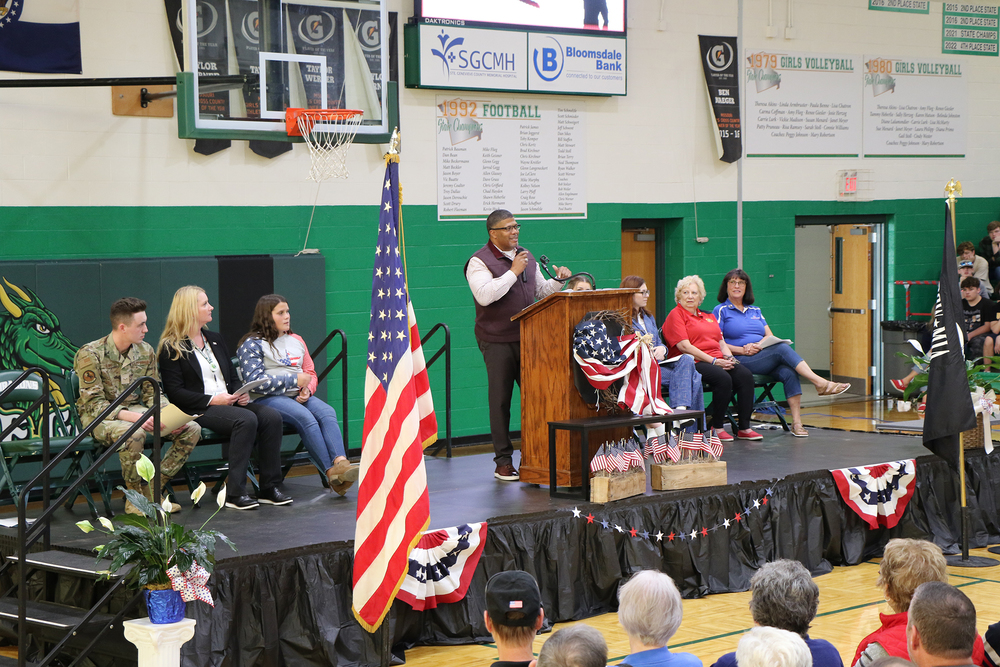 Ste. Genevieve Elementary held its program on Wednesday, Nov. 9, at the Performing Arts Center, and Bloomsdale Elementary will hold its program next Monday, Nov. 14. The high school and middle school Veterans Day Tribute ceremony was held on Thursday, Nov. 11  at the high school. All local veterans were welcome, and students personally invited veterans as their guests, as well.

Ste. Genevieve High School, Ste. Genevieve Middle School, and Valle Catholic hosted a luncheon for veterans prepared with contributions from local business sponsors mentioned below. Following the luncheon, the Veterans Day Parade began at the American Legion and wound through downtown past Valle, Ste. Genevieve Middle School, Ste. Genevieve Elementary and back behind Ste. Genevieve High School. Small American flags lined the parade route, where middle school students in the National Junior Honor Society had placed them the day before, to honor members of the military, both current and retired, who protect our freedoms. Students and staff at the schools waved banners and flags during the parade to thank our veterans for their service.

We would also like to thank the following: the Veterans of Foreign War Post 2210 Color Guard; Mrs. Betty Arnold from the VFW Post 2210 Auxiliary; all of our alumni who are serving active duty; our high school seniors who are enlisted or plan to enlist; all of the veterans and their spouses for taking time out of their busy schedules to attend the ceremony; the choirs and the bands for their contributions; the Student Veterans Committee for the planning of the day’s events; the students and staff for their attention and participation in the program; the Dragon’s Lair Productions, the SGHS Broadcasting Team, Valle Catholic Schools, FFA, NJHS, FBLA, SGHS Girls Basketball Program, SGHS Football Program, SADD, and the Student Councils from both SG R-II and Valle for planning and executing the 2022 Veteran’s Day Tribute, the Parade of Veterans, and the Veteran Luncheon.