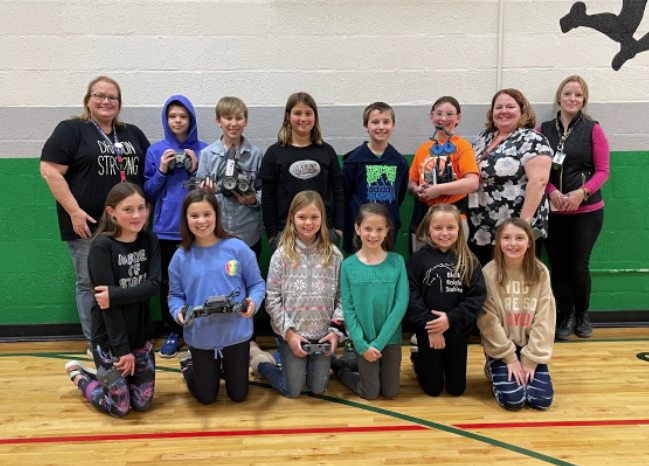 Twelve Ste. Genevieve Elementary fourth and fifth graders recently completed their VEX IQ Robotics Club.  The students met once a week for two hours after school over several months to participate in a STEM-based program that introduces students to the field of robotics, engineering, and technology. Students worked in three teams to design and build a robot from scratch while learning teamwork, leadership, and problem-solving skills.

On March 19, 2022, the 12 young engineers traveled to Park Hills Central Middle School to participate in a scrimmage with middle school students from Park Hills and Fredericktown. During the scrimmage, teams from each school worked together in a game-based engineering challenge to complete several tasks and earn points. Despite the difference in age and experience, the elementary students collaborated very well with the middle school students and earned awards for their performance.   Team Cybernetic Chaos earned the “Up and Coming” Award for their impressive showing and robotic skills, which included being able to suspend their robot from a bar to earn extra points during the competition. Team Fallout earned the “Excellence” Award for their engineering notebook they kept during the robot-building process and their perseverance in the competition.

The following week, the robotics team was able to show off their robots and their skills with a student assembly and a parent exhibition. The teams of students led the program and explained how the robots were designed, the competition challenges, and the scoring system. Each team then participated in mini-challenges to demonstrate how competitions work. Following the parent exhibition, guests of the robotics students had an opportunity to drive the robots and attempt the various challenges.

Thank you to teachers Andrea Fritsch, Crystal Koenig and Johna Bequette who volunteered their time to work with the robotics students. Congratulations to the students on a great VEX IQ robotics season!